Ziv Marom, Founder & CEO The movie sets of the big-budget, old-school action flick, The Expendables 3, which brought together some of the most iconic actors, always had a helicopter and pilot ready to be deployed to shoot aerial footage that covered thrilling car chases, explosions, and action sequences. Every creative cinematographer would back the importance of aerial imagery in visual storytelling, on how it can simulate the viewers’ perception. However, every cinematographer would also agree that aerial shots, as easy as it may be to visualize mentally, are equally hard to execute, especially while capturing low-altitude aerial footages. In this context, the cost overhead for having helicopters on the set, the rigidity and bulkiness of jigs and cranes that constrain shooting, are among the other challenges that any typical production crew faces.

"xFold is the only drone of its kind in the market that can switch on location, between having 4, 6, 8, or 12 different motors configurations, for different missions and applications"

If it wasn’t for the problem-solving mindset and entrepreneurial spirit of a cinematographer, Ziv Marom—who founded California based ZM Interactive (ZMI)—most of the captivating aerial shots that were portrayed in The Expendables 3 and many more household names in movies and TV shows would not have been the way they are known for and recognized today. Bringing in affordability, ease-of-use, transportability, and seamless compatibility with integrable hardware and AI-powered, automated piloting capabilities, the UAV stack of ZMI are purpose-built to seamlessly fly for long while carrying rugged and heavy payloads, unlike other drone solutions in the market. Their offering proved to be so effective that the crew at The Expendables 3 was impressed by the technology and for more than half of a month-long shooting schedule, the helicopter was never resorted to. “Many application areas that require helicopters can be replaced with our drones, which are more efficient, safer, cheaper, and easier to operate,” states Marom.

Originally invented by Marom for his cinematography projects, ZMI’s xFold range of drones—Dragon, Cinema, Spy, and Travel—are structurally designed to deliver smoother flights by distributing payload over a large frame surface there by putting lesser stress on the drone’s frame, motors, and arms. These foldable UAVs fit in standard sized baggage without having to disassemble propellers. The multi-rotor hybrid variants of xFold drones can achieve five hours of flight time as opposed to the off-the-shelf drone having at most 30 minutes, with a payload capacity of up to 300 pounds. They possess three-axis stabilized camera gimbals with live video feed and separate camera control, reaching speeds of up to 80 mph. Furthermore, ZMI’s drones are embedded with GPS and visual tracking sensors, which allow controllers to replicate maneuvers to facilitate easy incorporation of VFX solutions.

Carving a Niche in Other “Needy” Industry Verticals

Marom, while continuing to strengthen ZMI’s footprint in the entertainment space, was quick to realize the unique value proposition that his readily deployable drone stack would impart to other industry verticals. Today, presiding over ZMI as its visionary CEO, he strives to diversify the application areas of his novel drone tech. To do so, he emphasizes on sharpening the customizability prong of their solutions and services. “We have carved a unique niche that is in between the regular and military grade drones.

We have put forward an ecosystem of configurable drone models and software technology stacks, which our clients can combine and make use of as their usecases demand

xFold is the only drone of its kind in the market that can switch arms on location, having 4, 6, 8, or 12 motors configurations,” says Marom. The AI-powered and automated piloting software platform that runs ZMI’s drones is also designed to smoothly integrate with other prominent software and analysis solutions in the market. The company has gone the extra mile to facilitate analysis and export of the drone-captured data. ZMI also offers a software development platform for its clients with which they can further build and customize the offerings in tune to their requirements. From a compliance standpoint, all of ZMI’s drones are fully insured and registered with the Federal Aviation Administration with the company’s pilots duly certified by the entity. Their drones are eligible to fly legally in the U.S., Canada and Europe.

In a nutshell, ZMI has taken all the necessary steps to take on other industry-specific tasks. ZMI’s drones have been used for the inspection of power lines at remote and high altitudes and have been used to lift transmission line cables “from one side of a mountain to another” as Marom recalls. The company’s drones are capable of even locating humans in locations such as dense woods that are otherwise unreachable by helicopters. The xFold drone models can deliver cargo or carry medics to disaster-struck areas, or loads for agriculture purposes, or even lift a human out of a disaster area.

In a short span since its entry into markets other than filmmaking, ZMI has been able to bag several interesting deals with various players. Marom shares a few impressive instances where ZMI’s services are put to use. At the recent volcano eruption site in the Philippines, their drones were the only ones robust enough to go beyond the safe zone in the harsh weather to map the entire area. In the previous year, the company carried out more than 200 pilot flights for Google’s innovative projects and plans to undertake even more this year. In yet another ambitious initiative, given that they have exhibited record-breaking flight time and payload capacities, their drones are being tested to be used as “drone catchers” wherein, instead of shooting down unauthorized UAVs, xFold drones would “net” them up and bring them “home.” With utmost configurability, compatibility, and customizability, ZMI’s solutions can be repurposed for any use case.

Continuing to Dominate the Filmmaking Market

It is not that film producers and professional cinematographers never considered trying out drones for shooting. The popularization and mass market penetration of drones did spur on quite a few manufacturers. However, most offerings were pretty amateurish. For one, the quality of footages from drone models with built-in cameras was nowhere near the Hollywood grade. Besides, professional cameras are pretty big with even bulkier accessories such as gimbal stabilizers and other controllers. The drones meant to carry such a setup should be robust enough in terms of battery power for prolonged “air-time” for takes and retakes and be equally capable of lifting heavy payloads. Prior to the conception of ZMI, there was virtually no drone manufacturer or solution provider that catered to these vertical-specific requirements of drones that are capable of housing any type of camera while harboring easy operating capabilities. ZMI is also one of the few entities that bring to the table, aerial cinematography as an end-to-end, fully customizable service offering for production crews.

To shoot effectively, camera crews no longer have to chase speeding cars on roller skates, or cram themselves into tight spaces, or even risk injury by hanging upside down and rotating-about on a rope that is tied to a crane. Drone cinematography is going to witness even wider adoption in filmmaking, and ZMI is well-positioned to cater to this inevitable trend that’s here to stay.

“I never finished school or degree,” says Marom when asked about his previous experiences that led him to where he stands today. As a veteran cinematographer and creative director who found his higher calling and eureka moments coming in from the drone technology realm, he attributes his stint with the Israel Defense Force (IDF) Intelligence Unit—where he mastered the art of robotics and process control—as the factor that led him to ultimately invent the xFold range of drones. At the time he introduced the first wave of ZMI’s drones, they were already way ahead of other drones in the market in terms of flight time and payload capacity.

“Today, we have put forward an ecosystem of configurable drone models and software technology stacks, which our clients can combine and make use of as their use cases demand. We can also extend our subject matter expertise, services, and assistance to their developers for that matter,” says Marom. It is perhaps Marom’s multi-faceted experience that has enabled him to lead ZMI forward with its initiatives and innovations and to ultimately spur the democratization of robust drone technologies among several industry verticals where they are needed the most. And he continues to push the limits of what their drones are capable of delivering.

The latest drone model of ZMI can carry payloads of up to 300 pounds and the company is actively working on increasing the payload capacity to 500 pounds. ZMI is also developing another head-turner of a technology that would enable two or more drones to intelligently “swarm up” to carry even heavier payloads. This is an ambitious initiative, which according to Marom, will be a game-changer. He believes that the company has already hit the threshold levels in terms of drone size to payload and speed ratio. Increasing the size or payload capacity would only lead to more bulky drones that would be undesirable to operate from a mobility and maintenance perspective. The novel swarm model of operations for lifting heavier loads and capturing alien drones is ZMI’s answer to overcoming the payload limitations while maintaining the ease of use and flexibility of drones. The swarm approach, as Marom notes, will be largely automated by predictive and proactive AI algorithms.

Evidently, with promising first-of-its-kind initiatives, projects, and capabilities that push the “applicability-boundaries” of drones as they are known, ZMI is well on track to elevate the drone technology and solutions landscape. 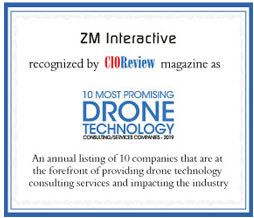 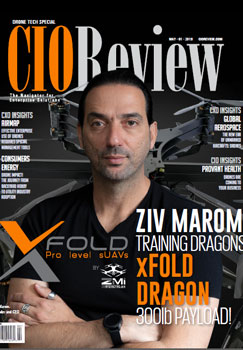